Wedged Mortise and Tenon Joints: What You Need to Know If you’re familiar with various woodworking techniques, you probably already know about the various kinds of joints used to join two pieces together. If you’re not, however, you may be confused as to what exactly this type of joint is.

What Is a Wedged Mortise and Tenon Joint? Before we go over what this type of joint is, it might help to know what a basic mortise and tenon joint is.

Despite the fancy name, the basic design of this woodworking joint is actually pretty simple.

A mortise and tenon joint consists of two components:

This type of joint is regarded as one of the strongest woodworking joints, second only to the classic dovetail joint. The design of the mortise and tenon joint also makes it an attractive joint to use.

The advantage of wedged mortise and tenon joints over basic ones is that because the pieces of wood are not glued together, you can easily disassemble the joint by removing the wedges.

However, the disadvantage of mortise and tenon joints, in general, is that they’re pretty hard to make since both the mortise and the tenon need to be cut with a great deal of precision for the joint to be functional.

How to Make a Wedged Mortise and Tenon Joint

Making a wedged mortise and tenon joint requires a few different pieces of equipment. If you already do a lot of woodworking, you probably have most if not all of this stuff to begin with.

Here’s the list of what you’ll need and why:

Before you actually jump right into making your joint, it’s always a good idea to make a template of your joint beforehand with some spare wood. This can help you figure out the right size and shape to make your joint for maximum strength.

When creating any mortise and tenon joints, it’s always better to cut the mortise first and the tenon second. It’s a lot easier to adjust a tenon to fit a mortise; you can always cut a tenon smaller if it’s too big or use larger wedges to compensate if it’s too small. A mortise can only be adjusted to make it bigger, not smaller.

To make the mortise, start by using a drill press to make the initial hole in the wood, and then use your plunge router to finish up the walls of the mortise. The plunge router is necessary to ensure that your mortise walls are perfectly straight.

After carving the initial hole, you’ll need to taper the ends of the mortise with your chisel. This is done to accommodate the extra width of the wedged tenon. The taper should extend about three-quarters of the way down the length of the mortise.

As for what angle to make the taper, anything from 3 degrees to 8 degrees is probably going to be enough to keep the tenon secure. The steeper the angle is, the more securely the tenon will fit in the mortise. You don’t necessarily need to make your joint as strong as possible if strength isn’t necessary for whatever you’re building, though.

To begin making the tenon, start by cutting out the basic shape of the tenon with your table saw. If you have other tools you prefer to use for this step, feel free to use them.

When fitting your tenon, it should be just ever so slightly smaller than the mortise it fits into; the space between the tenon and the mortise should ideally be no greater than the thickness of a piece of paper.

Using a table saw to make your wedges will help you ensure that each wedge is the right thickness and is
cut to the right angle.

At its narrowest tip, the wedge should be about the same thickness as the kerfs you cut, and it should taper at the same angle that you used for the mortise. The wedges should be a little bit longer than the tenon itself.

Step 5: Putting It All Together

Now that you’ve made all of the components, it’s time to assemble the joint. Start by pushing the tenon all the way through the mortise. Once it’s fully in place, insert the wedges into the kerfs, and tap them into place using a hammer.

If you’ve built everything correctly, the wedges should make the tenon spread out, lodging it firmly within the mortise. This will probably be enough to hold the joint together, but if you want a little extra security and you don’t plan on ever disassembling the joint, you can glue the tenon to the mortise if you want. This is basically the same idea as the standard tusk tenon joint, except instead of one large wedge inserted through the tenon, this design uses two smaller wedges inserted from opposite sides of the wedge mortise. A dovetail tenon joint is unique and uses neither kerfs nor a wedge mortise to keep itself together. A dovetail tenon joint uses a tenon that has one edge cut to fit the angle of the mortise, but the other edge cut to be perfectly straight. This leaves some space between the top edge of the tenon and the top edge of the mortise.

Into this space, a single wedge is inserted. When this wedge is in all the way, it creates a downward force on the tenon, locking it in place within the mortise.

This design, despite being a tusk tenon joint, doesn’t use a wedged mortise. Instead, tapered notches are cut along the sides of the tenon. Then, a two-pronged wedge is slid into place through the notches, preventing the tenon from being pulled out of the mortise.

You May Also Like: Half Lap Miter Joint – A Guide 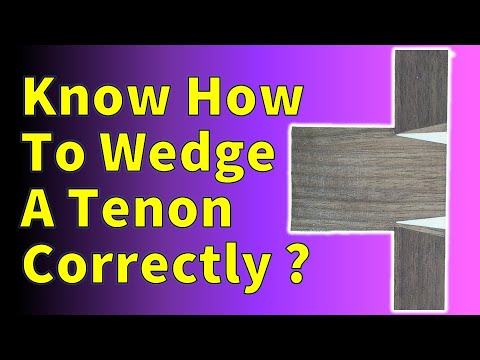 Knots in Wood: What Are They and How Can You Use Them?