Every single woodworker dreams about pulling off the perfect joint, a joint that isn’t just incredibly solid – lock tight, even – but one that is drop-dead gorgeous, too.

And while there are a lot of different joints that woodworkers can choose to work with when cutting a miter, none of them are quite as attractive or quite as visually stunning – let alone as secure – as lock miters are.

That being said, these joints can be a real nightmare to pull off unless woodworkers set up a jig specifically designed to knock them out (and then really focus on making sure that they master their order of operations to pull this joint off, too).

Below, though, we are going to simplify the process as much as possible so that you can start cutting picture-perfect lock miters from here on out with next to no headache, hassle, or extra effort.

Let’s get right into it, shall we?

What Are Lock Miters?

The easiest way to think of a lock miter is to simply think of it as a traditional 45° miter joint with a tongue and groove “curveball” thrown into the mix.

When these kinds of joints are pulled off to perfection you end up with a final result that gives you a perfect 90° angle but also the interlocking of the tongue and groove system that allows you to get a lot of extra mechanical strength (though you’ll still want to glue these joints, too).

A bit of a fancier upgrade for drawer corners, jewelry boxes, or even cutting hollow new posts that have to have a lot of strength and rigidity, these joints are so strong that you can even cut them with and grain or on the long grain without having to worry about them falling apart later down the line.

At the end of the day, if you can cut a miter to get the job done the odds are pretty good that you get even better results by cutting one of these lock joints instead. There are a couple of different benefits that you get out of using this specific kind of joint, not the least of which is a dramatically improved mechanical strength between the two adjoining pieces of material that simply wouldn’t have existed with a regular miter alone.

Sure, miter joints are reasonably solid when you glue them up (and especially when you shoot them full of finished nails or bury dowels in between them) – but the mechanical strength gets taken to the next level when you add in tongue and groove mechanical joiners into the mix.

On top of all that extra strength though, is the ability for these joints to sort of “suck in” to one another.

Your different joining components are going to be pulled into each other (and resist pulling apart), once again thanks to the tongue and groove component.

That’s a huge boost to tighten joints up, especially if you want to be sure that these joints stay nice and tight years later when heat and humidity have caused your wooden project to swell and contract (something that can loosen up traditional miter joints faster than you would have thought possible).

Finally, there’s just something really gorgeous about this kind of joint.

The locking mechanism looks fantastic in the corner, adds real visual flair, and is the obvious sign of a serious craftsperson that isn’t just content with slapping something together and hoping for the best.

All that being said, though, this joint isn’t always the easiest thing in the world to cut.

But that’s where the rest of this detailed guide comes into play! Even just a little bit of sloppiness during the preparation phase will tank your ability to join pieces together with real cohesion.

You’ll end up fooling around with plastic wood, wood putty, and caulk and paint to cover up the messes you’ve made – especially if you’re working with material that you just don’t have a lot of on hand.

Avoid those disappointments by zeroing in on the tips and tricks we highlight below.

The first big piece of the puzzle is making sure that your lock miter router bit is set in the perfect position to get this job done.

While we would love to tell you that it’s really easy to get things configured correctly, the truth is you’re going to have to do a bit of trial and error before you’re able to cement your router bit in place for the material that you are working with.

You’ll want to have at least a foot or two of stock available to use as test scrap, and you might even need a little bit more than that (so be sure that you have it around).

The first thing you’ll want to do is find the exact center of the bit – something that’s become easier to do thanks to today’s ridiculously high machining tolerances, but something that still often takes longer than most people expect.

Remember, different manufacturers are going to have different router bit profiles and not everything is going to be uniform right out of the box.

Find that centerline and mark it out on your fence. From there, you’ll want to mark the centerline on your test stock as well before running it through the router piece itself.

Adjust as necessary (making sure that the two lines inevitably meet up) and then you’ll be ready to rock and roll!

The only thing you have to do from there is set the fence itself so that you can cut the miter and the tongue and groove all in one shot. Make a couple of test cuts to confirm the fit is good to go, and you are going to be off to the races.

When cutting longer joints (like cutting the four hollow walls of a new opposed, for example) you need to make sure that you route one piece horizontally with the interface pointing in towards the tabletop.

After that has been taken care of, pull off another piece by routing it on its edge with the inside face actually touching the fence itself. Rinse and repeat until you have all four corners of your material (or as many pieces as you need to get your project done).

It might not be a bad idea to build a couple of pieces of “upper rail” that you can attach to the top of your router table fence, either. This lets you cut edge (especially really long edge joints) without having to worry about your material flipping or flopping one way or another.

Edge joinery can be difficult enough to cut on a router table when you’re looking to use lock miters, but end joinery becomes even more challenging – mostly because you have to worry about tear out ruining your joints right away and dealing with a face to fence cut pretty consistently.

Whenever you are doing end joinery with this kind of miter you absolutely, positively must have rails set on top of the fence. You need to be sure that your material isn’t going to blow over, pulling the material away from the router bit, and causing your tongue and groove joints to be misaligned (as well as your miter out of angle). 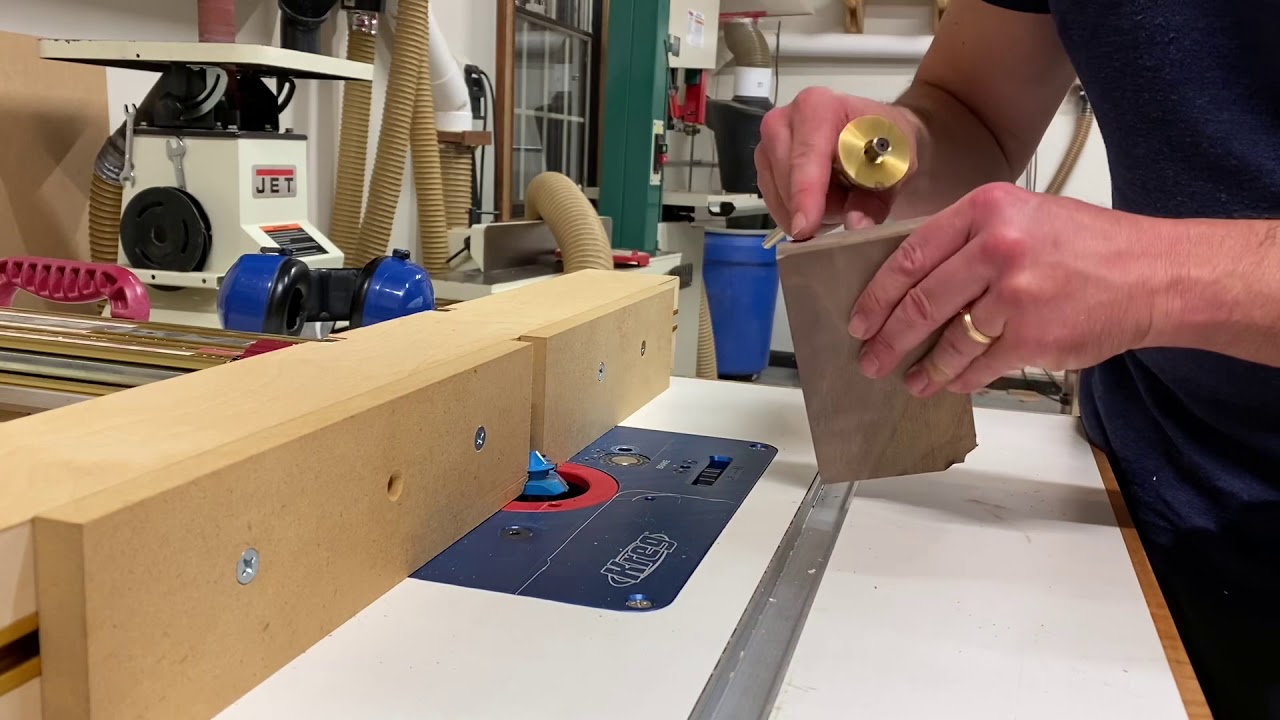 When you get right down to it, pulling off tight, strong, and useful lock miter cuts is a whole lot easier today than ever before thanks to our modern router tables and precision-made router bits.

At the same time, setup is absolutely everything when you want to use these joints in your project.

If you’re not totally aligned, if you aren’t able to keep your material nice and tight against the tabletop and the fence, and if you haven’t thought out how these cuts are going to come together you’ll end up wasting a lot more material than you would have with a bit of foresight.

Practice with some scrap material whenever you have an opportunity to do so (cutting edge and end joints) and you’ll find that this style of miter joint starts to become second nature pretty quickly.

From then on out every time you need to pull it out of your bag of tricks it will feel like you are climbing back on a bicycle – it won’t matter how long it’s been since you last cut a lock miter, you’ll be able to go through the motions and pull it off perfectly!