Master the Half Lap Miter Joint with This Guide

One of the things you learn pretty quickly in the world of woodworking is that the success or failure of your project often revolves around whether or not you use the right joinery methods at the right time.

A lot of woodworking newbies end up jumping headfirst into the mix after learning about a handful of joints, figuring that those joints – and maybe some mechanical fasteners – are all they really need to know about to knock out all the projects of their dreams.

Nothing could be further from the truth.

No, experienced woodworkers understand the value and importance of mastering as many joints as possible so that they can be deployed in the perfect situations – and that goes for the half-lap miter joint for sure.

What is the Half Lap Miter Joint?

One of the most important joints to master when you need to combine two different pieces of material that can withstand a tremendous amount of shear force (that push pieces of wood in opposite directions), the half-lap miter joint is relatively simple to look at – but a little more complex to pull off perfectly (especially with any real consistency).

A big part of traditional woodworking (certainly one of the oldest and well-practiced pieces of joinery in the fields), woodworkers today still rely on the half lap – and a decent amount of glue – to produce strong, locking joints that no other approach can match.

When Should I Be Using a Half Lap Miter Joint?

There are a couple of places where a half lap miter joint is particularly effective, none so more than when working with cabinetry.

Cabinets (especially face frames with intersecting corners) are perfect candidates for this kind of joinery, as is fine furniture construction – provided that there’s plenty of glue being used as well.

This kind of joint is also found in a lot of “knockdown” style projects. This involves taking the components and slapping them together with a lot of strength. It can also be knocked apart without too much effort. Rapid prototyping new furniture designs, for example, can really make use of this kind of joint – especially if it isn’t slathering with glue before it is put together.

Some people like to use this kind of lapping miter joint on picture frame construction as well. Basically anytime you have to combine two separate faces of material together you’ll want to at least consider going with a half lap when running through your joinery choices.

Because this joint is (relatively) simple to pull off you can cut these kinds of joints with almost any tools you have on hand.

As we mentioned a moment ago, this kind of joint has been used in woodworking for literally centuries and centuries. This joint existed far before anyone even thought of creating power tools.

The important thing to remember, though, is that this kind of joinery should only be done when you can take advantage of the long grains on the face of your wooden material to provide that extra bit of holding power.

You’re still going to need to use quite a bit of glue, too, so consider that when you are marking out your joints and getting ready to cut them.

If you need a little bit of extra strength, don’t be shy about drilling out some pockets for dowels. Mechanical fasteners can probably be left out of this kind of joint unless it’s going to be buried in the interior of the project and folks are unlikely to spot the exposed fastener heads.

Cutting Half Laps by Hand You are going to be making two cuts (one of them a cross-cut) when you are producing these kinds of lapping joints by hand.

The first cut – that cross-cut that we just mentioned a moment ago – is going to form the shoulder of the joint. In other words, this is going to be the “shelf” of the joint that matches up with the face of the other lap that you have cut as well.

The second cut is going to be the rip that goes down the middle of the board all the way to the cross-cut, removing that section of material so that the two pieces are lapped together and have the same thickness.

It’s a good idea to make sure that you have a saw that can reach across the entirety of the face of the material that you are working with. You’ll be able to do quicker, deeper cuts without feeling like you are chiseling away at the same time.

Marking gauges are particularly useful when you are cutting these joints by hand, too. Marking knives are even better, as they let you produce a cleaner and tighter finish if you can stay inside the grooves.

If your handsaw work was a little rough you might need to go back in and sand things down a little bit or clean up some space with a chisel.

At the end of the day, though, these joints can be consistently and accurately produced with no power tools whatsoever.

Cutting Half Laps with a Router

If you are going to introduce power tools into the mix, though, the router is going to make quick work of all your half lap needs.

The trick here is setting up a jig that allows your router to chew away exactly half of the material that you are removing, allowing you to quickly work through the marked-out areas of the joint area on both of your pieces.

A center gauge will definitely help, but it’s never a bad idea to make sure that everything is nice and square at the same time. Tolerances and quality control from modern manufacturers have come a long way in the last 25 years or so – but there’s nothing wrong with double-checking that everything is good to go!

If you have the ability to use a miter gauge you’ll be able to make sure that your workpiece stays locked into place while you router away the wood. That’s going to produce cleaner and crisper “shoulders”, helping out in a big way when it comes time to finish out your project.

Cutting Half Laps with a Miter Saw Half laps can be cut out using a miter saw (and even with a circular saw), though you have to be really careful when you’re using these tools – particularly if they are set up for more “general construction” uses and with anything but fine woodworking saw blades tucked inside of them.

A depth gauge is going to be incredibly valuable when you are cutting with either a miter saw or a circular saw.

Both of these saws have a tendency to “overcut” when you reach maximum depth, and that’s going to throw off your shoulders in a big way – causing your half lap to match up in a sort of sloppy position, requiring lots of extra glue and lots of finish work to touch everything up.

A miter saw is definitely a better tool to use than a circular saw, if only because you’ll be able to move the workpiece rather than the saw blade (with the opposite being true when you are running a circular saw).

Keep your individual passes nice and close and understand that you’re going to have to use a chisel (and probably some planes or sandpaper) to clean things up at the end of your run no matter what.

Cutting Half Laps with a Table Saw Cutting half laps with a table saw can be just as easy as using a router, especially if you are using a dado blade.

This kind of saw blade configuration can hog through your half lap in record time, though you’re probably going to have to go through a couple of passes to remove all of the material.

The advantage here, though, is that you can cut your shoulder on the initial pass and then work from the shoulder to the edge of the piece removing the rest of the material – all while never having to flip your workpiece and go with a rip cut.

Some quick adjustments with your fence allow you to knock this out in no time at all, though some people freehand the rest of the removal after they are incredibly careful with the initial shoulder cut.

Your mileage may vary!

Before we leave you, it’s important to focus on something that a lot of new woodworkers – and veterans alike, for that matter – have a tendency to do when they start to get into half-lap joinery.

Because this joint looks so simple on the surface a lot of people feel like they can sort of slap it together and still get halfway decent results. And while that may be true (to a degree), the results that you get when you carefully measure and really plan out this kind of joint are far superior and really don’t take that much extra time.

At the end of the day, make sure that you are carefully marking out every aspect of your half lap before you go to cut it. Double-check those markings on the half-lap that is going to be joining it, too, and then get down to business.

You’ll be much happier with your results with this approach compared to just sort of winging it! 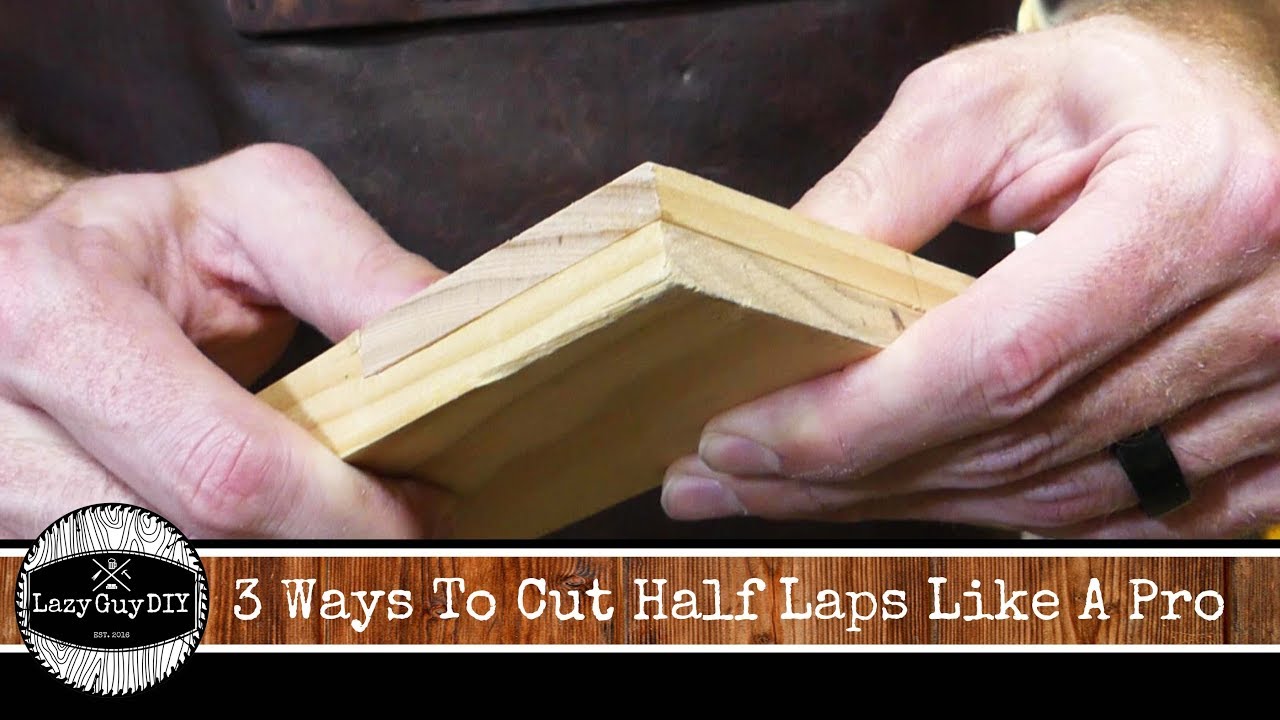