Table of Contents show
1) (Almost) Everything You Need to Know About Bevel Up and Down Planes
2) Bevel 101 – What is a Bevel Plane?
3) Bevel Up Planes
3.1) Benefits
3.2) Drawbacks
4) Bevel Down Planes
4.1) Benefits
4.2) Drawbacks
5) Tips for Tuning and Maintaining Both Types of Planes
6) Thinking About Buying Antique Planes? Read This First!
6.1) Bevel Up or Down? – Final Thoughts
6.2) References

While every serious woodworker understands and respects the role that modern power tools play in a woodshop, they also know about the limitations of modern technology – especially when stacked up against something as useful and as versatile as a bevel plane.

Used to smooth and flat wood surfaces, these amazing little hand tools are absolutely indispensable in any woodshop.

If you’re going to be doing any woodworking at all – from DIY projects to fine furniture and everything in between – it’s not a bad idea to have at least a couple of hand planes around to get the job done right!

Of course, this means you’re going to have to pick between “bevel up” and “bevel down” planes, a decision that’s a lot more involved than most people realize.

But that’s why we’ve put together this detailed breakdown.

By the time you finish this quick guide you’ll know (almost) everything there is to know about level planes, the differences between the two types, there are advantages and disadvantages, how to keep them in tiptop condition, and even how to buy the right ones going forward!

Let’s jump right in, shall we?

A bevel plane is a hand tool used in woodworking to even things up, to level, and to flatten the surfaces of wood that is later going to be worked with.

The cutting edge itself is cut on a bevel (a slight angle) that has been shaped by the manufacturer but can be reshaped and altered through the process of sharpening and honing.

Different angles can be used to do different things – some angles are great for shaving surfaces, others are great for removing lots of material, etc. – but at the end of the day this tool is about removing material as quickly and as accurately as possible. Bevel up planes have (no surprise here) a beveled edge that is angled upwards, creating a unique cutting angle compared to those that face downwards.

The overwhelming majority of these hand planes are going to come from manufacturers with a 25° bevel edge already shaped, with the tool itself angled at about 12°. This produces a cutting edge of 37°, an edge that is a little less severe than what you’ll find with the bevel down edges (but that’s something we’ll touch on in just a moment).

Because of the configuration of these kinds of planes, they do not include a “chip breaker” accessory the way that bevel down planes might. Some people miss this neat little attachment, but others are glad it isn’t there as chip breakers can actually cause the hand plane to bind up and clog if they aren’t kept in razor-sharp condition.

Right out of the gate, bevel-up planes have a significant advantage over bevel-down planes because they are so easy to work with.

Perfect for beginners that are just learning how to maneuver these kinds of tools, it doesn’t hurt that these kinds of planes are also (generally speaking) pretty inexpensive, too.

Highly versatile and adaptable, the lower angle of attack allows these planes to work and grain a little easier and a little more efficiently than bevel down planes are able to. The lack of the chip breaker mentioned earlier practically guarantees that these hand planes aren’t going to clog up or bind on users, either.

Because these tools have a lower center of gravity they offer more control as well. That’s a huge piece of the puzzle to successfully using hand planes. You don’t want your tool running all over the place on you (even if it is a hand tool).

Last but not least, the beveled up edge makes these tools are a whole lot easier to maintain, sharpen, and own. You don’t have to fight the tool to get the edge you are looking for and usually don’t have to worry about ruining the factory edge with too much work of the blade, either.

Though there’s not a whole lot to be upset with when using bevel-up planes, these tools definitely are more versatile options as opposed to the somewhat specialized tools that bevel down planes are.

This means that the actual finish they leave behind isn’t quite as smooth, as consistent, or as “ready to finish” when you are working with larger pieces of wood than what you’d get out of a bevel down choice.

The lack of a chip breaker may actually be a dealbreaker for some folks, as the chip breaker on a bevel down option helps to guarantee next to no opportunity for tearout and splitting. Bevel down planes are an older design used by professional and amateur woodworkers throughout history, the original design of hand planes and a design that has stood the test of time because of how useful and effective it is.

The downward angle of the bevel creates a sharp and severe cutting position, with the iron generally set at a 45° angle that allows this plane to really get to work.

Perfect for producing incredibly smooth finishes without a lot of extra effort on the user’s behalf, these things can produce almost mirror finishes that are sandpaper smooth in zero time whatsoever.

You have to be pretty handy to maneuver these tools effectively, though, so that’s something to consider!

As we just mentioned above, the finish that bevel down planes are capable of is absolutely second to none.

This is because of the higher cutting angle that the iron tilted at 45° produces, and the inclusion of a chip breaker basically locks in a smooth, soft, and almost silky finish when you’ve worked a piece of wood over with a bevel down hand plane.

A blade depth adjustment knob makes it easy to adjust (almost on the fly) the angle of attack as well. This allows expert users to adjust the plane as they are rocking and rolling, moving it up or down as necessary to get the results that they are after without negatively impacting the surface of the finish they are working on.

Because they cut so smoothly and so consistently they don’t require as much effort to “hog” as the way that bevel up hand planes might. That’s going to lower fatigue, let you work longer hours, and help you to crank up your output without a lot of extra effort.

Unlike bevel up hand planes, though, bevel down options are decidedly specialized tools that should be used in very specific situations.

You probably aren’t going to want to reach for these tools when you are working on smaller pieces of material. These planes can be a little bit harder to control on those small and narrow surfaces. A lot of that is contributed by the higher center of gravity that can help these planes to sort of “run” on you.

Another issue some people have is getting consistency out of the adjustments that they make on their bevel-down plane, at least until they really learn their own tool. It doesn’t take much to kick your plane out of whack, and then you have to sort of fight your way to get back to the results you were after – losing precious time along the way.

Lastly, not everyone is wild about the chip breaker. Some people absolutely love it and won’t pick up a hand plane that doesn’t include one whereas others feel that it can get clogged up, gummed up, and can be more of a frustration to work with than anything else.

Your mileage will vary!

Tips for Tuning and Maintaining Both Types of Planes At the end of the day, regardless of which type of hand plane you decide to go with, you want to be sure that you keep it in tip-top condition and razor-sharp.

This requires a bit of regular tuning and maintenance.

For starters, it’s important to completely clean your hand plane every single time you use it. Disassemble the plane (including the screw and knob hardware) and blow out any bits of dust, dirt, or debris.

A little bit of work with a wire brush cleans out your threads, and a touch of light machine oil on every metal component helps restore and protect the finish and the luster.

Sharpen and tune your blades as necessary – but also make sure that the soul of your plane is in perfect working order, too.

If you feel that the soul is getting a little bumpy don’t be shy about attacking it with a touch of medium-grit sandpaper and then waxing it to eliminate friction when it runs over a wooden surface.

You May Also Like: How to Use a Power Hand Planer on Wide Boards

A lot of serious and professional woodworkers absolutely swear by the bevel hand planes made 100 years or more ago, and there’s something to be said about getting your hands on one of these ancient but incredibly well-made pieces of woodworking history – and then bringing it to life inside your shop!

If you’re going to buy antique hand planes, though, make sure that everything is in good working order.

Other than that, though, you should be good to go snapping up classic hand planes whenever they come your way! 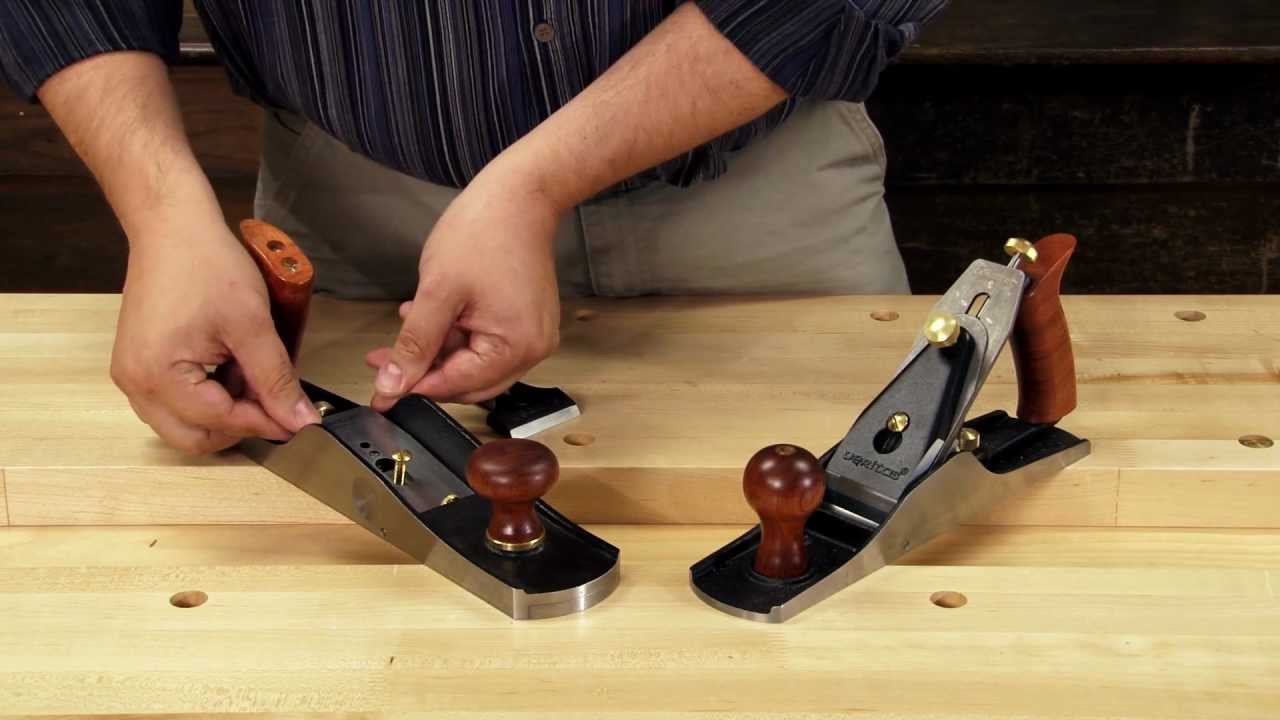 Bevel Up or Down? – Final Thoughts

When you get right down to it, it’s not a bad idea to have both bevel-up and bevel-down tools in your shop.

Bevel up options are definitely a little more versatile and perfect for woodworkers that are just getting into the swing of things and not yet really practiced with these tools.

Bevel down options are a dream to use after you’ve had a little bit of practice, helping to turn woodworkers into almost would surgeons – allowing them to move and remove the material with ease and grace.

Grab a couple (especially a couple of antiques) and get to work. The odds are pretty good you’ll fall in love with using these hand planes faster than you ever thought possible!